In August of 2018, Jeff was driving through a local suburb and saw a man walking an alpaca down the street. They had stopped so the alpaca could munch on some weeds on an empty block. The owner seemed bored, and was looking on his phone to pass the time.

He came home and was excited to tell me about it. I already knew of the alpaca, but it was fun to watch Jeff's amazement. He started to do some research on alpacas and looked up people on Instagram who had them as pets. We laughed about the possibility of getting one, but also said, "There's no way we'd actually get one" and agreed on that sentiment. Little did I know that Jeff continued his research.

A few weeks later, it was a Monday and Jeff had taken the day off work to help a friend with a job. However, the friend didn't need him in the end, so Jeff had the day to himself. I was at work, but popped home for ten minutes in my break to get something. As I arrived home, Jeff was firing up his 1970s Rolls Royce. It was a beautiful day, so I was not surprised to see that Jeff wanted to go for a drive.

"Where are you going?" I asked.

"Willunga to see an alpaca farm."

"I want to ask the farmer some questions."

I drove back to work, not really thinking much of it. Knowing that he'd taken the Rolls Royce, I knew he wouldn't bring an alpaca home with him.

That afternoon at 4pm, I was at work and Jeff sent me a text message. 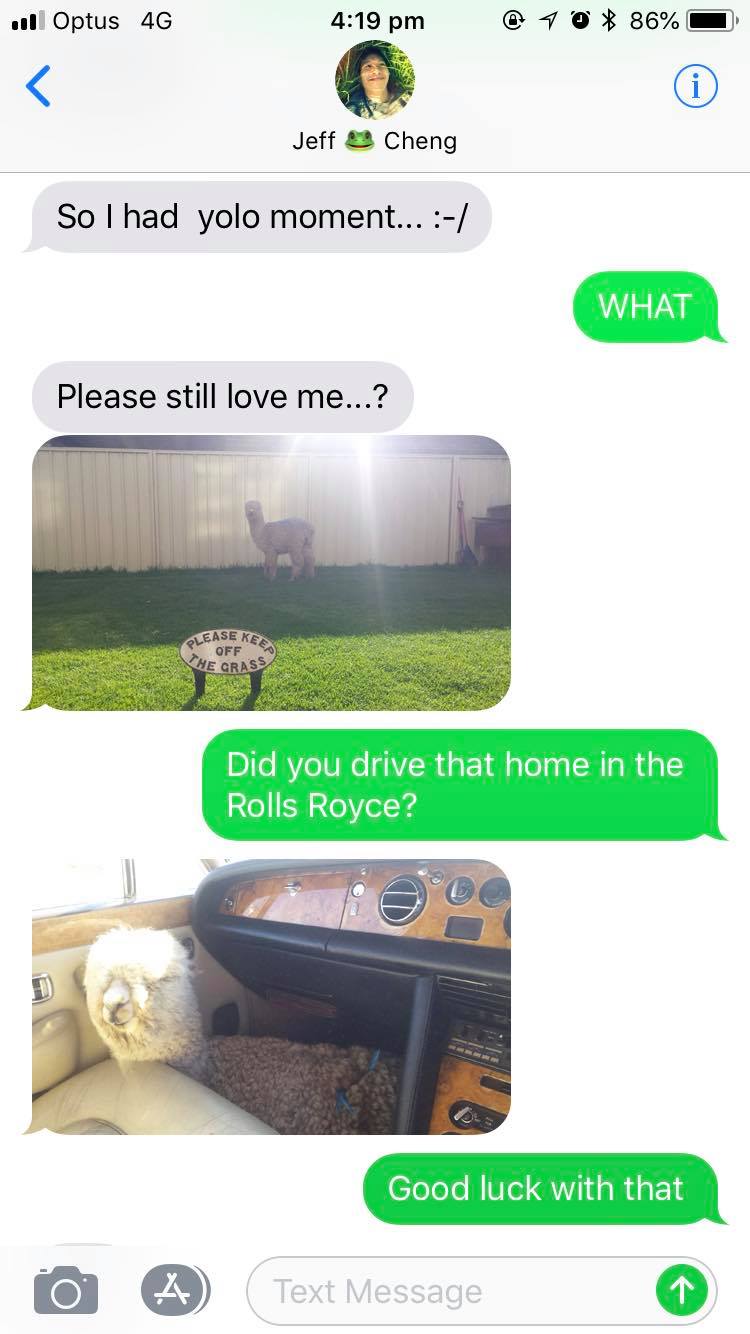 I was so shocked that I didn't really know what to say or what to think. I wasn't angry at Jeff because he's always taken full responsibility for all of our pets (I don't have to do anything), but I was a little apprehensive. I got home from work that night to see this: 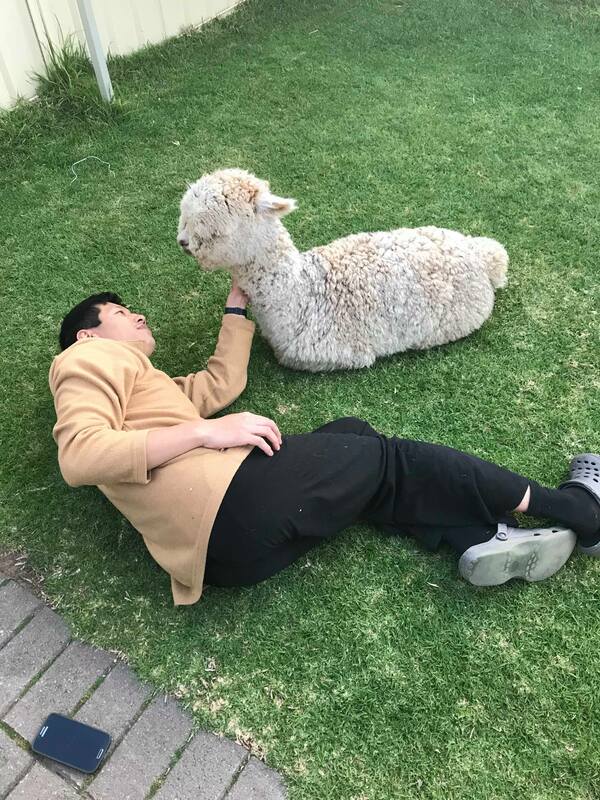 This was the beginning of a strong bond between Jeff and Alfie. Even now, Jeff is Alfie's "human". It's hard being the third wheel sometimes, but I know that Alfie is comfortable with me and trusts me too.

Having an alpaca is easy in many ways. They don't smell, they're happy to do their own thing and they come toilet trained. Not to mention the joy he brings to everyone who sees him!

In other ways it's challenging. We don't want him to get lonely, so we take him for walks every day and invest a lot of time in him - so in that way, it's been more high-maintenance than expected. Alpacas are really supposed to be purchased in pairs, so we've felt the responsibility and burden to be very social with him so that he doesn't get lonely. Aside from road trips to farms and special vets, our lawn will also never be as lush and is covered with hay. It looks pretty feral now, to be honest! But aside from those factors, we really love Alfie and I feel that he has changed our lives in many lovely ways - I guess in the same way that a family dog would!

So if you are thinking of getting an alpaca as a pet, we hope that you read our FAQ section and do your research, as they do have some different requirements to regular pets. The only way this has worked is because Jeff goes above and beyond to take care of Alfie's needs. He walks Alfie every day - rain, hail or shine. He treats the dead spots of lawn where Alfie poops, painstakingly removes the burrs from his wool, refreshes his hay and water everyday, grates carrots, follows a routine, takes him to the vet, organises playdates with other alpacas, respects his personal space, researches dangerous plants in the neighbourhood, organises the shearing, and on it goes.

Thanks for reading,
​Sophie x